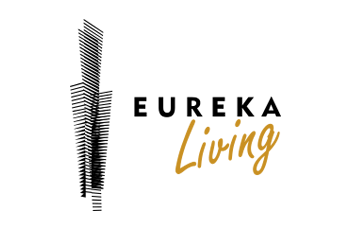 The Eureka Tower is a residential tower block complex on a 52,724ft² (4,900m²) site in the South Bank suburb of Port Philip, Melbourne, Australia. The tower was developed as a joint venture between Grocon (the constructor), Tab Fried (a Melbourne investor), Nonda Katsalidis and Karl Fender (the architects) who all combined to form a company, Eureka Tower Pty Ltd, to develop the tower.

The tower is named after the Eureka Stockade rebellion during the 1854 Victoria gold rush (the building crown is gold coloured with a red stripe representing the gold and the bloodshed). The horizontal lines on the building represent the markings on a ruler and the blue façade with white lines is supposed to represent the blue and white flag of the stockade.

Construction began in August 2002, the exterior of the tower was completed by 1 June 2006 and the building was officially opened on 11 October 2006. Residents had occupied apartments up to level 80 by July 2006.

The site of construction is an area of reclaimed swampland and the tower has special foundations to reflect this. The tower is 297.3m (984.3ft) high and consists of 91 floors (plus one underground) consisting of 74 apartment floors, 5 dedicated plantroom floors, 9 car park floors, 1 entertainment floor as well as the Observation Deck (SkyDeck) and Level 89 Functions. Eureka Tower briefly became Australia’s tallest building, superseding the Rialto, also situated in Melbourne, by 46.3m.

The architect for the Eureka Tower was Fender Katasalidis Architects (using Archicad software from Graphisoft); the civil engineering was carried out by Connell Mott Macdonald; the construction contractors are Grocon Constructors Pty Ltd and Lubeca Construction Pty Ltd. Vibropile supplied materials and equipment for the foundations.

Building services including mechanical and electrical engineering, fire safety engineering, air conditioning and heating systems was carried out by Norman Disney & Young. The elevators were supplied by Otis Elevator and installed by Norman Disney & Young. The lighting and the façade was supplied by Meinhardt Australia. The landscaping was designed by Tract.

The construction of the foundations was carried out in a special manner because of the presence of two layers of basalt above the base layer of Silurian siltstone bedrock (occurring at a depth of 35m). The Yarra River water table is situated only 2m below the tower site. The foundations used 243 continuous auger piles of 750mm diameter and where conditions dictated, 28 bored piles, 1.5m in diameter, were anchored 3m into the silt-stone.

Grocon used Favco construction cranes to move materials to the floor area where they were required. The building was constructed from reinforced concrete (slip-form method) and pre-stressed concrete. The tower design used a central core with columns on the perimeter and a 150mm floor slab thickness along with 800mm deep perimeter beams. A total of 5,000t of structural steel and 110,000t of concrete were used in the construction of the 200,000t tower. Most concrete pouring was carried out by two mobile concrete pumps or two Putzmeister tower-mounted pumping booms.

The contractor also used a Putzmeister 35A 14000 HPD concrete pump to transfer 100MPa concrete to specific areas for specialised uses. The required concrete strength decreased as the building height increased; 40MPa was used on the upper 15 floors, while 100MPa was used at the lower levels.

A Grocon-Lubeca jump form was used for the core, which was one of the project priorities so that the lift motor room could be built and outfitted. Grocon and Lubeca built the table forms for the floors to a dimension of 2.4m×3.6m. These had casters for portability and a hoist was used to move the formers between floors.

The façade of the building consists of 52,000m² glass and 40,000m² of aluminium panels. The glass is specially designed to reflect heat in the summer but retain heat in the winter and also to be light and durable. The glass skin ‘double glazing’ will reduce heating and cooling costs by 40% in an environmentally friendly manner. The top ten floors of the tower have 24ct-gold-coated glass as a façade.

The first panes of gold glass were added to the City Road side of the building in late October 2005. Gold glass now covers level 82 to the roof on level 92 and the north-east and south-west faces of the tower have gold double glazing. The gold glass was manufactured in Canada by AFGD and shipped to Melbourne. The window panels weigh between 150kg and 200kg each depending on their size and over 400 of the panels were installed on the top 11 levels (installation completed in March 2006)

The elevators for the building were supplied by Otis. In the first stage of the building Otis supplied nine Elevonic 411 elevator systems for installation adjacent to the central core. In addition there are also two Skyway elevators that rise at a speed of 9m/s and can elevate a car to the top of the building in 40 seconds. These will serve the observation decks. The alternative is 3,680 stairs.

Also, two Gen2 elevator systems were installed, which are a state-of-the-art design since they require no machine room and use flat polyurethane coated steel belts rather than traditional steel cables. The unique traction of the belt system allows smaller, quieter, less powerful and maintenance-free permanent magnet hoist machinery and controller systems to be installed in the hoist way. These elevators serve the residential tower and the basement. The elevators are the fastest in the southern hemisphere.

The Eureka Tower contains 549 residential apartments of various sizes between floor 11 and floor 87, including some large luxury apartments and penthouses. The apartment levels are divided into three distinct areas within the complex all with separate entrances: floors 11 to 24 are ‘river rise’; floors 25 to 52 are ‘premier rise’; while floors 53 to 87 are ‘sky rise’.  Plus an additional 24 apartment in Cook Street.

Between ground level and floor 10, there  residents’ car park for 814 cars (first nine floors), a swimming pool and retail areas. The top nine floors of the complex, known as ‘summit complex’, have public viewing areas, restaurants, an observatory (Eureka Sky Deck 88 at 282m).

The skydeck was opened in May 2007 and features thirty viewfinders an observation terrace and a glass cube which hangs over the side of the building giving people the chance of a ‘ride’. The opaque edge projects 3m over the side with tourists inside and then the glass becomes clear giving a fabulous view of the surrounding buildings and vista.

Two floors are used as service and plant floors. There are also specialised areas, such as the 82nd to 87th floor penthouse apartments (the summit), which are the highest apartments in Melbourne and with one floor dedicated to each cost around A$7m before decoration and fitting out. The foyer is clad in Italian marble with designer furniture and has 6m-high ceilings.

The top of the tower can actually flex around 600mm in high winds and there are two 360,000l tanks of water on floors 91 and 90 to assist in dampening the oscillations set up by the wind

Eureka Tower’s principle architect, Nonda Katsalidis saw these original sculptures in 2003 and began the process of finding funding for a large scale version while Stringer adapted the idea to the building in regards to scale, layout and construction method.

Katsalidis and Stringer had discussed the idea of making a permanent installation on various building projects over the years and the image of a Queen Bee and colony had a obvious conceptual compatibility to the context of this gigantic residential tower. The gold finish of Stringer’s works also complimented the golden glass apex of the building designed by Katsalidis.

The sculpture is made from anodized aluminium sheet using cast aluminium for all the antennae and small bees’ legs. The sheets are riveted together using 110,000 anodized rivets.

The work was begun in January 2006 at Stringer’s Richmond studio and the completed work was installed in December 2007.

The installation at the entry of Eureka Tower is a collaboration between noted landscape artist David Long and the architect of Eureka Tower, Nonda Katsalidis.

The stones came from a quarry in Lysterfield where they have been grinding and weathering for thousands of years. Exfoliation of the outer layers have moulded the stones into the shapes as we see them today.

The idea of the community of the obelisks of stone comes from their actual shapes, which give rise to a representation of the three phases of the human condition:

The three metre steel “trees” are in fact a climbing frame for the planting, which will comprise extensive Chinese jasmine and wisteria. Whilst mature plants of some size are being put in, they will (over the next 12 months) grow to climb over the entire frame, making giant green shapes to offset the black polished granite plates and to provide a green canopy of shelter over the curves of the natural granite boulders.  Similar, in some respects, to Jeff Koon’s landmark garden sculpture “Puppy”, the installation (when complete) will not only waft the soft fragrances of the Chinese jasmine across the entry-way, but provide a balanced and bold counterpoint to the highly polished surfaces of the entry-way.

Eureka Tower Pty Ltd remains committed to its association with the arts, and rather than selecting traditional static garden pieces has created a sequence of more curvaceous shapes and materials that will allow the green climbers and creepers to take over and form a developing and articulated green installation